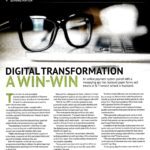 as the online school payments system that has been described as ‘transformative’ for the school administrative team and the school community at Auckland’s St Thomas’s School, in this article published by the Education Gazette Focus, October 2016. Integrated with ETAP student management system and used for PTA fundraising, paperless show tickets as well as instantly updating ETAP with payments, Kindo’s saved the office hours in payment processing and reduced foot traffic in the office, cut down on volunteer time and made it easier for parents. St Thomas’s School note that they’re seeing payments come in more quickly too. View the full article.

The decision to embrace digital communications at Auckland’s St Thomas’s School has been described as ‘transformative’ for both the administration team and the wider school community.  An online payment system coupled with a messaging app has replaced paper forms and emails as a way of informing parents and caregivers about school activities, payment information and changes to sports events and trips.

Last April, the school introduced school payment system, Kindo and communications app, TiqBiz.  “The advantage for parents is that they can take action as soon as they see a notification from the school,” says school administrator, Mary Lees.  “TiqBiz links through to Kindo if there’s a payment to be made, so parents can fill in permission forms and pay online instantly wherever they are.”

With 840 students on the roll and an active programme of activities to deliver, the admin team had found themselves handling a lot of small money prior to April 2016.  Mary and her colleagues had been looking at a range of school payment systems but they didn’t want to move until they found a system that could integrate with eTAP.

“With Kindo, eTAP is instantly updated as each payment is made, which cuts out double handling and is an easy reference point if there is any confusion over what has and has not been paid,” says Mary.  “The more parents that pay on Kindo, the easier it is to track payments.  The parent does all the form filling, so providing accurate information is the parent’s responsibility which adds clarity.  I can’t even count the number of hours it saves us in payment processing.”

The school has worked hard to engage parents in the digital journey and six months later 85% of school families are signed up.  However, the transition has not been without its teething problems according to Mary.  If the school had to do it over again, they would probably introduce the two systems separately.

“Some parents are more tech savvy than others, so introducing two new things at once did cause a little confusion,” she says.  “But these initial difficulties are becoming less and less as we go on.  We’ve tried to make the process as friendly as possible and have invited parents to call us at any time if they have questions.  We’ve been really well supported by Kindo throughout.”

Feedback from parents and caregivers has been positive and most feel that going digital has simplified communication.  “We’re generally seeing payments come in more quickly, which is probably down to convenience and the fact that parents can see everything they need to pay for each time they login.”

In addition to the everyday student payments and sports subs, over the last six months the primary school has successfully run paperless tickets for their school production and a sausage sizzle with funds channeled straight into the PTA bank account. “This has reduced foot traffic in the office, cut down on the amount of volunteer time and made it easier for parents,” says Mary.  “So far, going digital has been a win/win for us.”